Where To Find Us:

Meetings are the second Wednesday monthly at Ledo's Pizza off Jefferson Street Frederick MD at 7:00PM.

Locations may change during NFL offseason

at: SPECIAL MEMBERS MEETING FOR DECEMBER

Future meeting will be held at -

Want to Become a Member?

For more information, use our JOIN US page or email to info@FrederickRavensRoost43.com. Look forward to hearing from you! 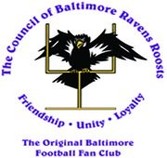 History of the Council of Ravens Roosts

The Council and its family of Roosts are Incorporated as Non-Profit Pleasure Organizations. Each Roost consists of members over 21 years of age, and are dedicated to the Council Charter: "To Support Professional Football in Baltimore."﻿

The Council of Baltimore Ravens Roosts, formerly known as, The Council of Colts Corrals, is Baltimore's oldest and best-known football fan club. This organization has supported professional football in Baltimore since 1957. The first Colt Corral was started in Baltimore by a group of Die-Hard Colts fans. Shortly, there were three other Colt Corrals throughout the City. These Corrals came together and decided to form a Council.

Since its inception, the Council has had the pleasure of supporting three teams in three different football leagues: The NFL Baltimore Colts, the USFL Stars and the CFL Stallions. All three of these outfits have given the city of Baltimore Championships! The Colts were the NFL Champions in 1958, 1959, 1969 and Super Bowl V Champions in 1971. The Stars were the 1985 USFL Champions. In 1995 the Stallions brought home the Canadian Grey Cup Championship, the first U.S. team to do so.

Now a new era of football has been ushered into Baltimore with the arrival of the BALTIMORE RAVENS. The Council responded by renaming the Corrals to Ravens Roosts. To date, there are 50 active Roosts in Maryland, Delaware and Pennsylvania. Currently our membership consists of over 3,500 football enthusiasts.

In addition, many Roosts hold their own Bull and Oyster Roasts, Crab Feasts, Dances, Raffles, Bus Trips to home games, away trips, Tailgate Parties and group TV gatherings. Like the Council, all Roosts support one or more local charities or noble causes.